Wireless or portable barcode scanners can mean one of two things:

As stated before, these type of scanners use Bluetooth to communicate between the handheld scanner and its base station/charger. The base station is connected to a PC or other terminal with a USB cable. The scanners are also able to connect directly to a bluetooth enabled device such as a tablet or smartphone etc. 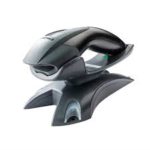 The Honeywell Voyager 1202g-bf wireless scanner does not use a battery but rather a “super capacitor” to power the unit, a first in its class! The scanner when placed in its charger takes about 35 seconds to charge and this will provide enough power for at least 100 scans.

To see our range of Wireless Barcode Scanners Click here …

Contact us today to discuss the various models and which one would best suite your application.

E&OE. All prices and specifications are subject to change without notice.
All published prices are a reference only and include vat unless otherwise specified.
Valid quotes are required before any purchase can be made.
Our prices are not dependent on the daily exchange rates, but on the price paid for various shipments and are fixed until such time that the stock has run out.

We only accept Electronic Fund Transfers (EFT) payments. Unfortunately no Credit or Debit Cards, no Cheques and no COD. Items purchased are ready for collection or delivery 2 to 3 working days after receipt of POP. Read more …